The first lecture of the summer semester's Research Colloquium will be held by Anna Mazurkiewicz, Visiting Professor at the ScienceCampus.

While examining psychological and political warfare the term “instrument” appears in the context of the Free Europe Committee (FEC). This organization, while ostensibly “privately managed” was an unattributed asset of the US government. It sponsored the Assembly of Captive European Nations (ACEN) – an umbrella organization of exiled politicians from East Central Europe. Even by the late 1950s, the FEC considered the ACEN “most effective instrument at FEER disposal in the national and international organization field for use in the representational pressure on governmental and political personalities in the Free World” - a notion vehemently contested by the exiles, as they in fact advanced U.S. political agenda in the truly global forums.

Upon reading the manuscript of my book on the ACEN (DeGruyter, 2021) A. Ross Johnson (RFE director, 1988–1991 and a researcher) commented: “In the end, I find it remarkable how much ACEN “rogue” activity the FEC put up with. Maybe the crude LB Johnson quote applied: About Edgar J Hoover "I'd rather have him inside the tent pissing out, than outside the tent pissing in."” I will take this remark as a starting point to approach the question of exile agency. My primary interest is in the intersection of public diplomacy, soft power, propaganda with the aim of examining a particular partnership that emerged between the American Cold War political/psychological warfare instrument and the multinational political exile organization that claimed legitimacy to represent a hundred million captive compatriots.

Anna Mazurkiewicz is an Associate Professor at the Faculty of History, University of Gdansk, Poland. She is spending summer semester 2022 as a Leibniz ScienceCampus Visiting Professor at the University of Regensburg. She holds the Chair in Contemporary History at the Faculty of History in Gdansk, where she also leads the work of the interdisciplinary International Border Studies Center. She is an expert on Eastern European—US relations in the Cold War and migration history. Her research and publications have explored the United States after World War II; U.S.-Polish diplomatic relations; media system in the United States; U.S. policy towards the countries of East Central Europe; political activity of refugees from East Central Europe in the United States after World War II; political emigration from East Central Europe in 1945-1989. Her most recent book is Voice of the Silenced Peoples in the Global Cold War: The Assembly of Captive European Nations 1954-1972, (Berlin-Boston: De Gruyter 2021). For more on her publications, awards and achievements, follow this link. In Regensburg, she will teach a seminar on Cold War Exiles in the Global Cold War (Tuesdays, 10-12) and will also give a lecture on 28 April as part of the ScienceCampus/Graduate School research colloquium.

The research colloquium is organized in cooperation with the Graduate School for East and Southeast European Studies (GS OSESUR). 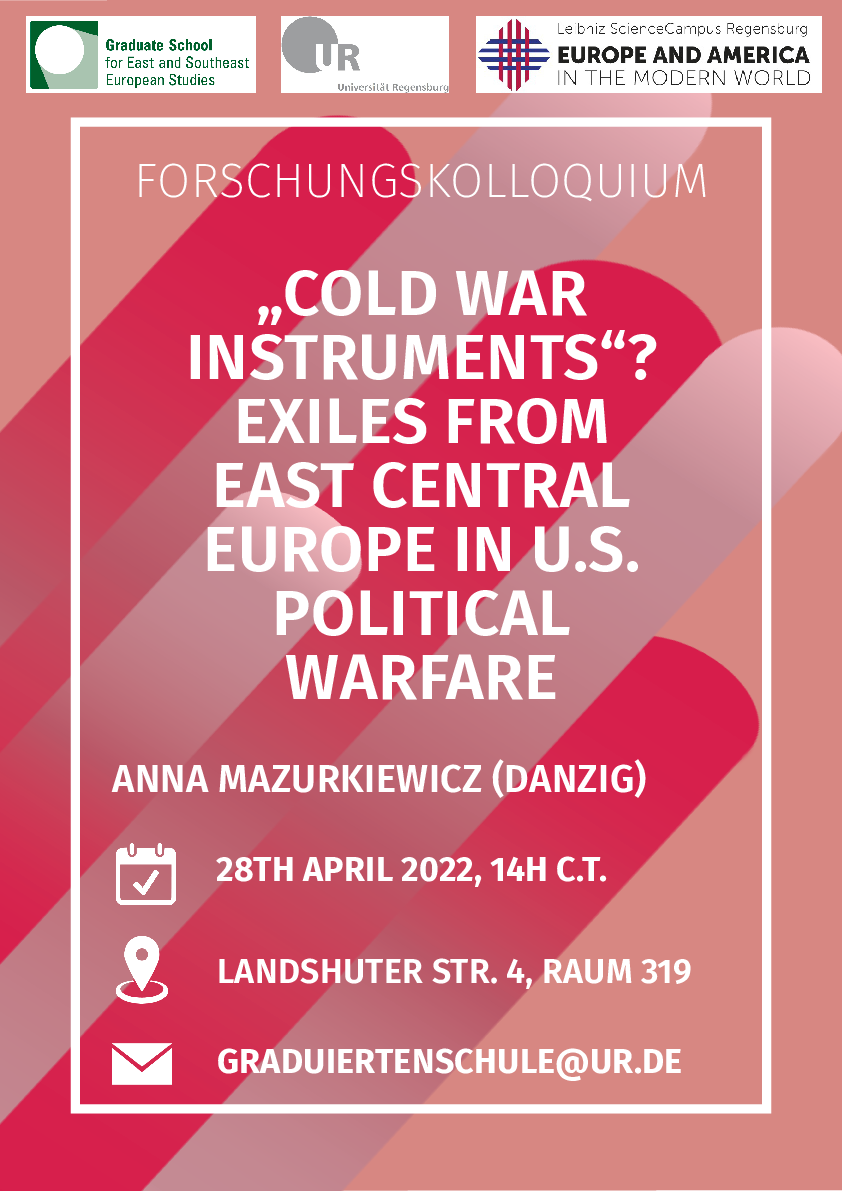