The Ukrainian Diaspora: From the Cold War to Putin’s War

The third event of IOS Regensburg's "Russia's War Against Ukraine" series takes place on Thursday, March 17, at 5 pm CET. It is organized in cooperation with the Leibniz-ScienceCampus “Europe and America in the Modern World” and the Graduate School for East and Southeast European Studies, Regensburg.

IOS Panel #3: The Ukrainian Diaspora: From the Cold War to Putin’s War 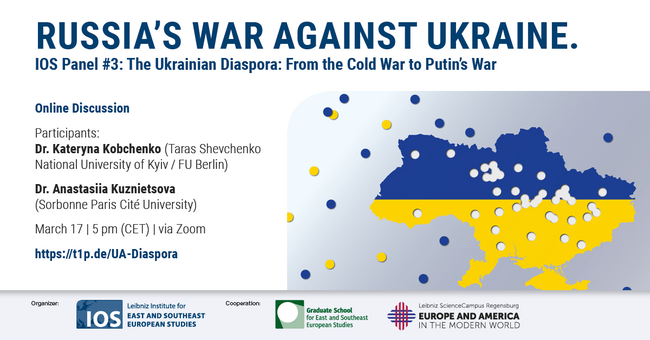 Organizing help for refugees from Ukraine, collecting donations for the Ukrainian army, lobbying governments, and organizing rallies in support of Ukraine – such activities made the presence of large migrant communities with Ukrainian roots in Western Europe and North America instantly visible after February 24, 2022, when Russia invaded Ukraine. But who is the Ukrainian diaspora, since when does it exist, what are its roots? How have the Russian invasion, and events since 2014 affected the identities of migrants from Ukraine? How do current experiences and practices compare to those during the Cold War, when an anti-Soviet Ukrainian diaspora organized in America and Western Europe? Are there links and similarities? These questions will be discussed by this interdisciplinary panel, which also will be live streamed on Facebook.